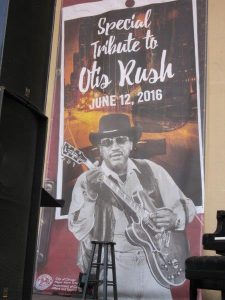 Since 1984, the world-famous Chicago Blues Festival has taken place every June in picturesque Grant Park beside Lake Michigan. It features well-known national and international artists, as well as talented newcomers and top acts from the country’s many regions. With five stages of performances during three full days, the free festival always offers delight and discovery. This year’s Chicago Blues Festival was held from Friday, June 10 through Sunday, June 12.

On June 10, there was a celebration of Alligator Records 45th Anniversary and label owner Bruce Iglauer with Tommy Castro and the Painkillers, Toronzo Cannon, Lil’ Ed and the Blues Imperials, and Curtis Salgado. In an era of dwindling album sales due to digital internet downloads, Iglauer’s record company has continued to release new albums with both established and emerging artists. 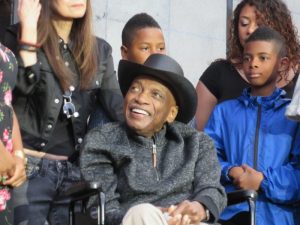 The following days honored two individuals whose music has been tremendously influential and enduring: Otis Clay, who passed suddenly on January 8, and Otis Rush, who is no longer able to perform.

On June 11, Otis Clay was remembered with a joyful and soulful celebration of his music by his own band, now the Otis Clay Tribute Band, along with Cicero Blake, Theo Huff, Willie Rogers, and numerous other performers. R&B and Soul Legend Otis Clay, who moved to Chicago from his home state in Mississippi in 1957, started his career in Gospel and performed in several notable Gospel groups. 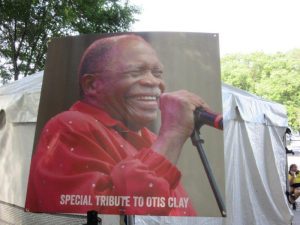 Ten years later, he was generating Soul hits. By the 1970’s, his songs became known to music fans of different genres, especially after he released “Trying To Live My Life Without You” on Willie Mitchell’s Hi Records label. The song was a Top 40 R&B hit in 1973 and became a much-covered song, known to Rock music fans through the version released by Bob Seger in 1980. Most recently, Clay, a Blues Hall of Fame inductee, was posthumously awarded the Blues Foundation Soul Blues Album of the Year for This Time For Real with Billy Price and Soul Blues Male Artist of the Year. 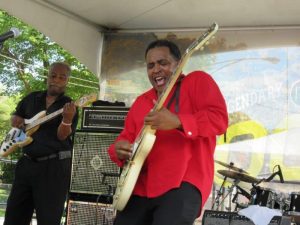 Other festival highlights that day included harmonica legend Lazy Lester with Rockin’ Johnny; 2015 International Blues Challenge winner Eddie Cotton; and, the great Irma Thomas, whose set list on Saturday evening included Otis Redding’s, “I’ve Been Loving You Too Long (To Stop Now),” “You Can Mess With My Husband, But Please Don’t Mess With My Man,” and “Iko-Iko” with the crowd waving kerchiefs into “I Done Got Over It.” 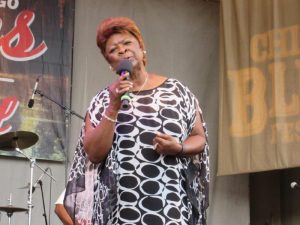 The final evening of the Chicago Blues Fest at the Petrillo Music Shell, the main stage of the festival, focused on a tribute to Otis Rush, whose singing, songwriting and, especially, his guitar playing have influenced countless Blues, Rock, and British Blues Rock musicians ever since he recorded for the Cobra Label in the 1950’s. The evening started with statements by Chicago Mayor Rahm Emanuel proclaiming June 12, 2016 as Otis Rush Day and Carlos Santana appeared on a video in which he discussed Rush’s strong influence on his own music. Eddy “The Chief” Clearwater, who had performed his own rocking and soulful set before the tribute began with songs that included “Too Old To Get Married,” “My Babe,” My Baby Left Me,” “I Wouldn’t Lay My Guitar Down,” and “I Came Up The Hard Way,” was one of the artists who returned to the stage to honor Rush with Ronnie Earl and the Broadcasters on “All Your Love (I Miss Loving).” Earl, who remained on stage for the duration of the show, performed “As the Years Go Passing By” with Piano Blue. Wisconsin guitarist Billy Flynn was joined by Mike Ledbetter, Monster Mike Welch, and Piano Blue on “I Can’t Quit You Baby.” In addition, Bob Levis and Lurrie Bell performed “My Love Will Never Die” and Brother John sang “Homework.” Some of the many other musicians on stage included Bob Stroger, longtime bass player for Otis Rush, Harlan Terson, Big Ray, Sam Murphy, Mike Wheeler, Carl Weathersby, Abb Locke, and Eddie Shaw. 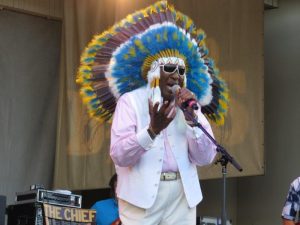 Everyone hoped that Otis Rush would be able to attend the show and were thrilled when he appeared at the outset. Rush smiled continuously as he watched the deeply moving tribute to him from the side of the stage with his family and his longtime friend, Buddy Guy. More than ten years ago, Rush gave his final performance at the Chicago Blues Fest. A lightning storm with torrential rain had reduced the size of the crowd to about thirty people, one of whom was me. Seeing one of the greatest blues musicians of all time one last time on that same stage this past June is a memory that I will always cherish.