It was a big time at WMSE’s 2nd Annual Big Band Grandstand with Dewey Gill, presented by Jenny and Bob Hillis in honor of Bob and Genie Friedman. Headlining the event was Louis Prima Jr. and The Witnesses who kept the crowd on their feet and swinging to the beat. This gala and silent auction was held to raise money for the upkeep and digitization of the WMSE jazz library which streams 24 hours / 7 days a week. The library has over 10,000 pieces and includes: CDs, 33s, 45s and 78s. It is WMSE’s mission to keep jazz alive in the Milwaukee market. Thanks for coming out and we look forward to seeing you next year. 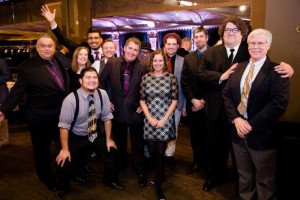 Is that you cutting a rug on the dance floor of the Turner Hall Ballroom?  Check out the video below and see.