For the first time in its history, the 34th Annual Chicago Blues Festival was held in Millennium Park in Chicago on June 9-11, 2017. Its former location, Grant Park, is across the street from the new location. Although Grant Park held a lot of special memories for this writer, it was interesting and fun to experience a new location. The event included four stages, including the Jay Pritzker Pavilion, which is its main stage. One noticeable difference is that the Pritzker Pavilion has a very large projection screen directly behind the stage to enable those who are sitting far away on the lawn to be able to easily see the performers on the stage. 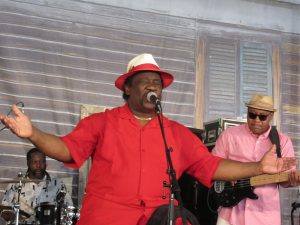 Highlights from Friday included an afternoon set at the Front Porch Stage by 92-year old, Henry Gray, who was a pianist for Howlin’ Wolf, a 2017 Blues Hall of Fame Inductee and a 2006 recipient of The National Heritage Fellowship by the National Endowment of the Arts, a top honor for folk artists in the U.S. Gray has also received other awards and nominations for his long and productive career. Gray was joined by guitarist Bob Corritore, who has produced and recorded albums with him, including Henry Gray Plays Chicago Blues (Southwest Musical Arts Foundation Records, 2011), as well as the much in-demand Wisconsin-based guitarist Billy Flynn, legendary bassist Bob Stroger, and drummer Kenny “Beedy Eyes” Smith (son of the late, great drummer and harmonica player, Willie “Big Eyes” Smith). Gray and Corritore’s set was followed by a tribute to Barrelhouse Chuck Goering, a mainstay of the Chicago Blues scene and the last of the original Boogie-Woogie and Barrelhouse Blues pianists, who died earlier in the year. Honoring Barrelhouse Chuck were a few of his old friends and bandmates, including Billy Flynn, an annual performer at the Chicago Blues Fest, and Piano Willie Oshawny, who made a rare appearance at the blues fest as he is now semi-retired. Friday evening’s headlining performance at the Jay Pritzker Pavilion was a celebration of 40 years of Billy Branch and The Sons of Blues. Guests who joined Billy Branch on stage included former and current bandmembers, including Lurrie Bell, Freddie Dixon, Carlos Johnson, Mark Koen & The Lights, Bill McFarland and Chicago Horns, Carl Weathersby, and J.W. Williams. 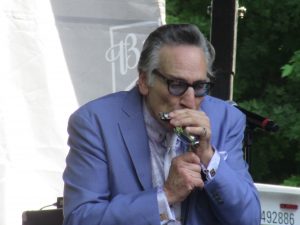 As with the other days, Saturday’s lineup included musicians of varying ages and tributes to those who have passed. There was a Southside Tribute to Killer Ray Allison and a tribute to Eddie Taylor by his son, guitarist Eddie Taylor, Jr. The headliner for Saturday night was the great singer, songwriter, producer, William Bell, who is well-known for his 1961 single, “You Don’t Miss Your Water,” as well as many other songs; his extensive work for the Stax label; and, his numerous other accomplishments. Honors that Bell has received include a Lifetime Achievement Award by the Americana Music Association and a 2016 Grammy Award in the Best Americana album category for This Is Where I Live. 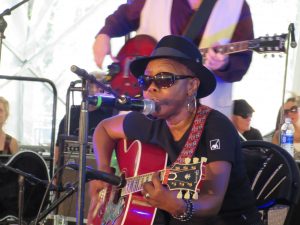 Sunday’s lineup was equally strong, with a set at the Front Porch Stage by Mud Morganfield, who looks and sounds just like his Dad, Muddy Waters and performed several of his Dad’s well-known songs, such as “40 Days and 40 Nights,” “Can’t Get No Grindin’,” and “Got My Mojo Workin’,” along with some of his own songs; a special appearance by singer and guitarist Zakiya Hooker (John Lee Hooker’s daughter), who performed a Jazzy Blues set at the Mississippi Juke Joint; and, on the same stage, a memorable performance by Denise LaSalle, a Soul, R&B and Blues singer, songwriter, and producer who recorded almost 40 albums prior to her death in January of 2018. On Sunday afternoon, harmonica master Rick Estrin and his band The Nightcats played a very energetic set at The Crossroads Stage, in spite of the hot weather on that day.  To close out the festival, Ronnie Baker Brooks, one of the best Blues guitarists playing today, honored his father, Lonnie Brooks, who died a few months earlier in April of 2017.  At the beginning of the evening, there were photos projected from the large screen on stage of many musicians who had recently passed, including Chuck Berry, James Cotton, Ted Harvey, Scotty Moore, and Leon Russell, as well as important individuals who promoted Blues music, such as Marie Dixon (Willie Dixon’s wife, who ran The Blues Heaven Foundation) and Amy van Singel (co-founder of Living Blues magazine). Projecting on the screen prior to Ronnie Brooks’ set were photos of his Dad with him, his brother musician Wayne Baker Brooks, who joined Ronnie on stage, and other musicians with whom Lonnie Brooks performed. Then, Rhiannon Giddens of the Carolina Chocolate Drops and who has her own solo career, captivated the audience with her singing, violin and banjo playing, and magnetic stage presence. The final set was by the very popular Gary Clark, Jr. 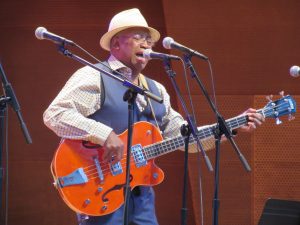 The upcoming 35th Annual Chicago Blues Festival will be held once again in Millennium Park on Friday, June 8 through Sunday, June 10, 2018.  On Friday evening, there will be a very special celebration of the 65th Anniversary of Delmark Records and founder, Bob Koester, whose tremendous importance in preserving and disseminating Blues music through his independent record label (and record stores), cannot be emphasized enough.  (Note: A taped telephone interview with Bob Koester was broadcast on Friday, July 28, 2017 and is available on the WMSE Archives.) There will be tribute performances for musicians who Koester recorded on Delmark Records, including Carey Bell, Big Time Sarah, Jimmy Dawkins, Sleepy John Estes, Willie Kent, Magic Sam, Roosevelt Sykes, Junior Wells, and Big Joe Williams. Particularly noteworthy will be a reunion of Lil Ed and Dave Weld to honor Lil Ed’s uncle, J.B. Hutto, from whom Weld learned how to play slide guitar. On Saturday, there will be a Little Walter Tribute with Billy Branch, Billy Boy Arnold, Corky Siegel, Rick Estrin, Sugar Blue and Magic Dick.

Throughout the weekend, there will be many talented and accomplished musicians performing on multiple stages. However, the final set on the final evening is reserved for the beautiful and soulful Mavis Staples, who always leaves any audience feeling joyously uplifted.

More information about the upcoming Chicago Blues Festival can be found at cityofchicago.org  Tune into Sonia’s Blues Drive every Friday from 3pm – 6pm on WMSE at 91.7 FM or at WMSE.org