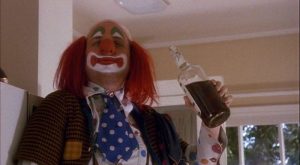 WMSE 91.7FM and The Times Cinema are teaming up to bring you SHAKES THE CLOWN, the underrated dark comedy written and directed by the iconic comedic talent Bobcat Goldthwait. Doors and DJ spin at 8 pm. Film at 9 pm. All tickets are $5.

SHAKES THE CLOWN chronicles the fall of one of the world’s most unlovable clowns as he plies his trade and tries to survive in Palukaville, a town where everyone is more or less a Bozo. Shakes loves women and more than that, he loves his booze. Like many of his painted peers, ol’ Shakes likes to hang out at The Twisted Balloon, the favorite local pub where he hoists a few, beats up on mimes (the lowest caste in Palukaville) and causes trouble with his girl friend Judy, a woman who cannot say the letter “L.” Because the slovenly Shakes can’t seem to make it to birthday parties sober and on time, he is fired from his booking agency, causing him to go on a big drinking binge. Later, Shakes awakens and learns that Binky, a lousy TV-clown, is framing him for beating up Shake’s former boss with a juggling pin. Now poor Shakes must clear his name. He must also rescue “Juwee” who has been kidnapped by the nefarious Binky, and he must come to grips with his alcohol problem.

Perhaps today’s current obsession with creepy clowns started in 1992. Of ‘Shakes The Clown’, Goldthwait has said he based the clowns’ dysfunctional and self-destructive behaviors on the backstage antics of fellow stand-up comedians. Fittingly, the film is populated with a who’s-who and who-will-be of comedy: Adam Sandler, Blake Clark, Robin Williams, Tim Kazurinsky, Kathy Griffin, and Tom Kenny (future voice of Spongebob Squarepants). If you didn’t think the backstage of The Laugh Factory on Sunset Blvd. circa 1988 was a scary place, we promise you will now!