Friday Night Freak Show – So, I married an Axe Murderer 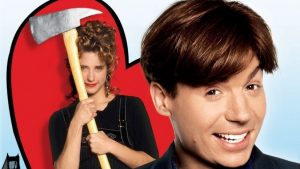 WMSE 91.7FM and Times Cinema have a killer Valentine’s Day planned for you, celebrating the 90’s classic SO I MARRIED AN AXE MURDERER. All tickets are $5. Doors and DJ at 8pm. Film at 9pm.

Back in 1993, every teenager in America could quote Mike Myers’ parody of beat poetry in SO I MARRIED AN AXE MURDERER. Now, 25 years later, we STILL know the lines by heart. It’s high time this cult comedy gets the love and adoration it deserves, so we invite you to join us as we flash back to the ’90s and attempt to do our best Scottish accent.

Root for Charlie (Mike Myers) as he both adores and fears Harriet (Nancy Travis), the local butcher who may or may not be a serial killer. Get sloshed along with Stuart Mackenzie (also Mike Myers) as he jams to the Bay City Rollers and hates on Colonel Sanders. And, most importantly, re-experience a classic along with people who appreciate this ridiculously silly, ridiculously fun comedic gem as much as you do.