Calendar
When:
August 19, 2022 @ 7:00 pm – 11:45 pm
2022-08-19T19:00:00-05:00
2022-08-19T23:45:00-05:00
Where:
The Cooperage
822 S. Water Street
Cost:
$20
Contact:
The Cooperage
Event website
WMSE Sponsored & Partner Events
A Giant Dog GGOOLLDD Tigera
GGOOLLDD. A GIANT DOG. A CAN’T MISS SHOW.
GGOOLLDD never left, but now they’re back with a blistering new track “Superstar,” and the unbelievable live show you’ve come to know and love.
GGOOLLDD is an American electropop band from Milwaukee, Wisconsin with music similar to Chvrches, Ladytron, Haerts, and M83. The band is known for its catchy lyrics, showmanship, and lead singer Margaret Butler’s unique sense of style and stage presence. GGOOLLDD’s lyrics have been described as “youthful and charismatic”. Butler describes her lyrics making the point that “we’re all okay, we all love, we all hurt, and sometimes people suck and want to bring us down. But the important thing is that I love you, and a lot of great people love you, and you are gunna make it through whatever comes your way.” Margaret further states, “I’m giving you the stuff that makes me happy in hopes that it will make you happy. Definitely, we dabbled in a more commercial sound for a hot second because, you know, we were a new band trying new things but we quickly learned that is not us.”
———–
A Giant Dog – The quintet Spoon’s Britt Daniel calls “the greatest American rock and roll / punk band since I don’t know when.”
A Giant Dog is raucous ear candy culled from the hook-driven melodies of Slade, the glammy swagger of Marc Bolan, the morbid fantasy of Killer-era Alice Cooper, and the unpredictable wit of Sparks. These songs are by, for, and about the losers, freaks, and outcasts. The lonely. The terminally horny. Boozehounds and party animals.
———–
Milwaukee’s own Tigera opens this show. Coming in hot off of their Summer Soulstice appearance, this Milwaukee based Pop/Rock quintet is making their Big Show Cooperage debut. Let’s party. 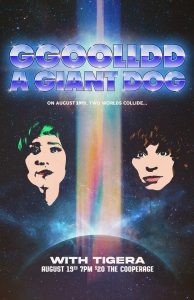