ICHC – Socks in The Frying Pan 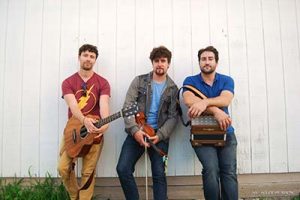 Kick off an early St. Patrick’s Day with the sizzling Irish trio Socks in the Frying Pan at the Irish Cultural and Heritage Center, 2133 W. Wisconsin Ave., Milwaukee on Saturday, March 7 at 7:30 p.m. Doors open at 6:30 p.m.

The award-winning band with the distinctive name hails from Ennis, County Clare, the universal hub of Irish traditional music. The trio blends tight three-part vocal harmonies, virtuoso musical ability and a witty stage presence to capture audiences around the world. They are Milwaukee Irish Fest favorites performing most recently in August 2019.

The Hayes brothers – Fiachra on fiddle, banjo and bodhrán and Shane on button accordion, along with guitarist and lead vocalist Aodán Coyne – initially played together during sessions in Ennis pubs. Their first album titled Socks in the Frying Pan was released in 2012. They made their touring debut in 2014 followed by the release of Return of the Giant Sock Monsters from Outer Space in 2015 and Without a Paddle in 2016. They released a live album, Raw& Ril, in 2019. Aodán also released a solo album, If Only I Knew Here, in late 2019.

Each of the band members was attracted to music early on. Fiachra was playing fiddle by age three and then added piano, mandolin, whistle, guitar, button accordion and banjo. Fiddle remains his first passion and he has won many competitions including the prestigious “Ceol an Gheimhridh.” He also earned a music teaching degree from Limerick’s Mary Immaculate Collage. Shane was experimenting with sounds on the piano as soon as he could walk, taking whistle lessons at age six and playing the accordion two years later. He was awarded best accordion player 2015 by the Irish Music Association. Along with studying teaching, he earned a master’s degree in Irish traditional music from the University of Limerick. Aodán grew up in a musically rich family and began playing guitar as a teen-ager. Folk World said he is “capable … of joining the ranks of the great Irish vocalists.”  He earned a B.A. in Applied Music at the Dundalk Institute of Technology, studied arts administration in Cork and biochemistry in Limerick.