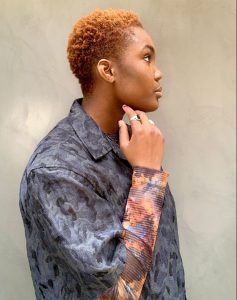 Tune into WMSE as we check in with Arlo Parks after the release of her debut full-length to Transgressive Records, Collapsed In Sunbeams.

“It was poetry that first captured Arlo Parks, not music. As a teenager in West London, the artist read Allen Ginsberg’s “Howl,” which she remembers emanating a sense of yearning and longing, while also challenging ideas of form and rhyme. Parks says the poem gave off an air of humanity, but was equally strange and intense.

“When she first tried her hand at poetry, it all seemed to revolve around escapism — a Hollywood fantasy, moving off the grid or falling in love. But music eventually made its way into Parks’ creative practice when she started speaking poetry over beats. Art, poetry and songwriting all meshed into what would become her first EP, Super Sad Generation, a collection of vivid and confessional songs from a Gen Z perspective.

“Now, at 20, Parks has put out her debut album, Collapsed in Sunbeams. It’s brimming with story songs — vignettes — about joy, pain, heartbreak and depression. It centers the mental health and struggles of her and her friends. “Talking about mental health and talking about the difficult parts of adolescence,” she says. “It’s what I was living through and what the people around me were living as well.””