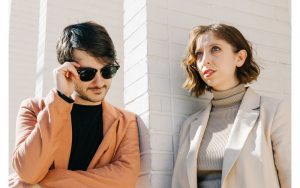 Tune into WMSE as Erin talks to Charleston-based band Babe Club about their new EP, Remember This Feeling.

“The songs on Remember This Feeling, the new EP by Charleston’s Babe Club, have been around for a while. Years, in fact. It’s just that Jenna Desmond and Corey Campbell, the duo behind the band, were a little busy.

“A lot of those songs were written four years ago,” Campbell said. “We loved them and wanted them to have their moment. But we were playing in another band for a long time, and we were really unable to put in the time that we needed to record and release and tour the material.”

“The other band was SUSTO, Justin Osborne’s project that became a cult favorite in the last few years. Campbell played guitar and keys, and Desmond played bass in the band, but they left amicably in 2018 to start their own project. They also started dating right before their touring time with SUSTO began, which leads us to the inevitable relationship question: What’s it like being in a band on the road with your significant other?

“There are definitely some moments where it’s overwhelming,” Campbell said with a laugh. “We’ll just be hanging out trying to watch a nature documentary and Jenna will have this idea, like ‘What if we did this? We’ve gotta call our manager,’ and it’s 11 p.m., and I’m just trying to wind down, and I don’t want to talk about business right now.”

“Despite the delays, the five songs on Remember This Feeling don’t show any signs of wear and tear. The EP is a melodic feast: Explosive guitars, shimmering keyboards, pulsing basslines and beguiling vocals are found throughout.”