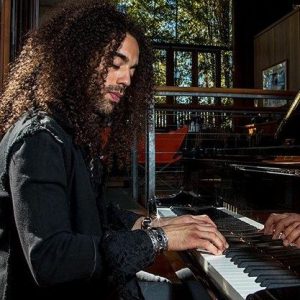 Dr. Sushi will host thrash-jazz pianist Cameron Graves for an interview on the Free Jazz BBQ in honor of his new release on Mack Avenue, Seven. Make sure to tune into WMSE to check out Graves’ unique style – Graves grew up in metal-rich Los Angeles, headbanging to Living Colour as a kid and, after immersing himself in jazz and classical studies for years, reigniting his love for hard rock through records by Pantera, Slipknot and his most profound metal influence, Swedish titans Meshuggah.

A soul-deep affinity for the peers who join him on the bandstand has been a continuing theme throughout Graves’ career. He met his musical comrades in the West Coast Get Down as a freshman in high school, and they nurtured their game-changing chemistry at a series of regular haunts that have entered the jazz lore: Doboy’s Dozens, 5th St. Dick’s, the Piano Bar in Hollywood, where the visibility, growing crowds and possibilities just seemed to surge.

Graves, like the rest of the West Coast Get Down, saw his profile explode following the 2015 release of Kamasi Washington’s debut, The Epic, easily on the short list of the most celebrated jazz releases of the 21st century. Since then, the collective has seen its members carve out their own identities, through their own acclaimed bands and releases and tours.