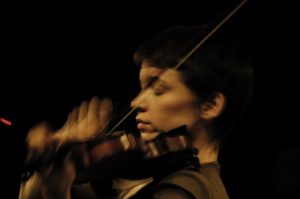 Tune into WMSE as Tom talks with composer, violinist and vocalist Carla Kihlstedt about her song cycle, ’26 Little Deaths’ that will be presented in Milwaukee in conjunction with Present Music.

Present Music will close its 40th Season at the Jan Serr Studio on June 23rd with the world premiere of Carla Kihlstedt’s ’26 Little Deaths’. The song cycle is inspired by Edward Gorey’s darkly Victorian alphabet book “The Gashlycrumb Tinies.” Published in 1963, the book depicts the demise of 26 children in a morbid satire of early children’s books.

She is a recognized classical composer who has performed with the International Contemporary Ensemble, has worked occasionally on projects with Tom Waits, John Zorn, and Fred Frith, and recorded numerous albums as a guest or session musician.