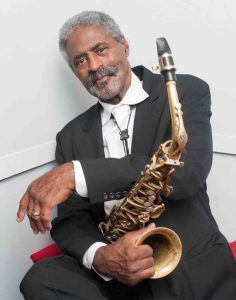 You’ll want to be tuned into WMSE as Dr. Sushi interviews jazz superstar Charles McPherson on the Free Jazz BBQ. Sushi says, “He has a new album out that we will be talking about. I also hope to get him to say a few things about the years that he spent in Charles Mingus’s band.”

Charles McPherson was born in Joplin, Missouri and moved to Detroit at age nine. After growing up in Detroit, he studied with the renowned pianist Barry Harris and started playing jazz professionally at age 19. He moved from Detroit to New York in 1959 and performed with Charles Mingus from 1960 to 1972. While performing with Mingus, he collaborated frequently with Harris, Lonnie Hillyer (trumpet), and George Coleman (tenor sax).

Mr. McPherson has performed at concerts and festivals with his own variety of groups, consisting of quartets, quintets to full orchestras. Charles was featured at Lincoln Center showcasing his original compositions 15 years ago, and once again joined Wynton Marsalis and J@LC Orchestra in April, 2019 honoring his 80th Birthday where they arranged and performed 7 of Charles’ iconic original compositions. Charles has toured the U.S., Europe, Japan, Africa and South America with his own group, as well as with jazz greats Barry Harris, Billy Eckstine, Lionel Hampton, Nat Adderly, Jay McShann, Phil Woods, Wynton Marsalis, Tom Harrell, Randy Brecker, James Moody, Dizzy Gillespie, and others.

Charles was the featured alto saxophonist in the Clint Eastwood film “Bird,” a biopic about Charlie Parker. Charles has received numerous awards, including the prestigious Don Redman Lifetime Achievement Award and an Honorary Doctor of Fine Arts from California State University San Marcos. Charles performed this past April at the NEA Jazz Master’s 2019 performance during Stanley Crouch’s tribute. Widely recognized as a prolific composer, Charles is now Resident Composer for the San Diego Ballet, where he has written three original suites for chamber music and jazz combos. In the summer of 2019, Dr. Donnie Norton will compile the entire book of Charles’ compositions for publication.

McPherson remains a strong, viable force on the jazz scene today. Throughout his six decades of being an integral performer of the music, Charles has not merely remained true to his Be Bop origins but has expanded on them. Stanley Crouch says in his New York Times article on Charles, “he is a singular voice who has never sacrificed the fluidity of his melody making and is held in high esteem by musicians both long seasoned and young.” Charles is a frequent guest at universities all over the world and also teaches privately. Many of his former students have gone on to have careers of their own in jazz, and have earned National Jazz Student Awards. Charles had the honor of being the subject of the Ph.D. candidate Dr. Donnie Norton’s Doctoral Dissertation: “The Jazz Saxophone Style of Charles McPherson: An Analysis through Biographical Examination and Solo Transcription.”