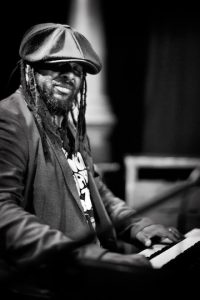 Tune into the Free Jazz BBQ for news from the talented Delvon Lamarr who is in town for a show in Milwaukee later that night.

It’s been a whirlwind year for the Delvon Lamarr Organ Trio since the release of their debut album, Close But No Cigar, last March. That LP topped Billboard’s Contemporary Jazz Albums Chart upon its release, while their limited red-vinyl 2018 Record Store Day release Delvon Lamarr Organ Trio Live at KEXP! sold-out immediately online and in shops from coast-to-coast (sparking a later re-pressing on black vinyl). Speaking of this KEXP in-studio performance, the YouTube video of the session recently exceeded 5 million views, while the Seattle-based instrumental soul/jazz threesome have been amassing a wealth of new fans, both here and abroad, with their heavy tour schedule. Toss in massive radio play across the globe and it’s safe to say that DLO3 have made quite a name for themselves in a very short time.

Now with new drummer, Keith Laudieri, in tow, Hammond B-3 maestro Lamarr and guitar extraordinaire Jimmy James plan to further expand their fanbase in both North America and Europe with an extensive tour that kicks-off this Wednesday, April 3rd in Decatur, Georgia and continues through the rest of the year.

After years of playing in bands that inevitably fell apart, as bands so often do, keyboard player Delvon Lamarr landed in a different kind of group: one founded by his wife and manager, Amy Novo. She created the Delvon Lamarr Organ Trio so her husband could fully focus on the things he does best: writing and playing music.

With a deep soul backbone augmented by jazz, rhythm & blues and rock ’n’ roll, the trio evokes a classic instrumental sound with a fresh, virtuosic sensibility all its own. Their chemistry stems from each musician’s unique abilities. Lamarr holds down basslines on the organ that are so vivid that audience members sometimes ask where the bass player is. “His left hand is second to none,” James says. “He’s got that, but he’s also got this wild approach. He goes for it, and he’s fearless about it.” Though James is more modest about his own abilities — “I mostly just go for what I feel,” he says.

“It means a lot to me that people dig what we do,” Lamarr says. “I just want people to feel it, basically. So far, it seems to be going pretty well.”