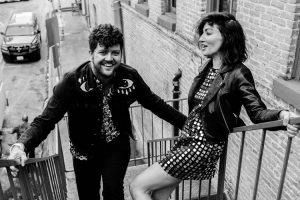 Tune in as DJ Paul Host welcomes KOLARS into the WMSE studios to chat before their Milwaukee show later that night! WMSE.org or 91.7 FM to listen in.

KOLARS is a band based in Los Angeles. Their sound is described as Desert Disco, Space Blues and Glamabilly. Founded by musicians Rob Kolar and Lauren Brown, both former members of folk group He’s My Brother She’s My Sister.

In 2017, their self-titled debut album was released to wide critical acclaim; Huffington Post “instantly fell in love with their tantalizing sonics and their energetic apocalyptic marvel”, Paste Magazine “KOLARS play their unique blend of 70s glam rock, 90s grunge and twangy country with every inch of their body”, Denver Post “KOLARS has a knack for buffing your weathered perspective to a glinting sheen. The world isn’t on fire; it’s glowing.”