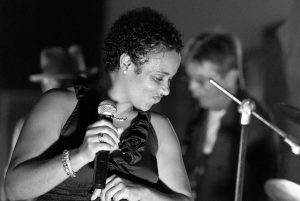 Tune into the Blues Drive with Sonia on WMSE as she talks with Mighty Ms. Erica about her history as a Milwaukee blues musician as well as her latest news and music! Erica is playing at Kochanski’s on Friday, October 24th with Robert Allen, Jr.

Inspired by Denise Lasalle, Linda Jones, Gladys Knight, and Etta James, Erica started singing at the age of two and was in a church choir by age four. From there, she took part in school performances, talent shows, church events and television. Erica was a lead vocalist for Phase Two Band, Darnell Kimbo Band, Misfits Blues band, Brew City Rhythm and Blues Band, and The Blues Disciples.

Erica released two of her own songs and recorded them with The Blues Disciples on their Gravy Train album. Erica has performed at Summerfest, the Paramount Blues Challenge in Memphis, Jazz in the Park, the Chicago Blues Festival and a host of other venues. Erica was recently motivated to start her own band “The Mighty Ms. Erica and The Sound Production”.