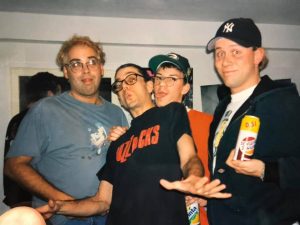 All hail the mighty punk band from glorious Titletown, Boris the Sprinkler! The band is coming to Milwaukee for a show at the X-Ray Arcade on Friday, October 8th. Von Munz checks in with Reverend Nørb, leader of the notorious Green Bay band.

Boris The Sprinkler were formed the night of the 1992 ShopKo fireworks in Green Bay. Veterans of numerous local bands (including minor Beer City Records sensations Suburban Mutilation), they opted to forgo most then-popular musical routes — long-stale hardcore, vaguely melodic emo-esque muttering, dull strummy plugged-in acoustic guitar crap — for the then highly-unpopular music they grew up playing: The punk rock of the late 70’s and early 80’s, albeit with a loony thrift-store goofball aesthetic. To the surprise of no one, the shenanigans of 2020 AD extinguished the band’s plans for a string of dates in support of Vespa To Venus. But, newly vaxed, waxed, and with a belly full of grape juice, Boris shall brave the rigors of I-43 to bring their Carnival of Spaz back to Milwaukee for the first time in almost two decades. Don your cheeseheads and ’80s new wave specs and come on out! P.S. The band enjoys socks, soup, and most polkas.