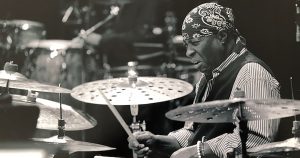 They’ll dig deep following the release of Davis’ 80’s release, Rubberband. The original producers and Wilburn, Jr. completed the album, which was abandoned in the mid-’80s and released it afresh last month on Rhino Records.

“According to Wilburn, the original Rubberband album was shelved when Warner Bros.’ Tommy LiPuma “felt Miles should go in another direction,” paving the way for the Tutu album, a collaboration with bassist-producer Marcus Miller.

In revisiting the material, Wilburn, Hall, and Zanes tried to stay true to Davis’ mindset in the mid-Eighties.

“What people may not know is Uncle Miles was digging MTV during the Eighties,” Wilburn tells RS. “When he saw a group he dug, he turned up the volume, then called the artist’s label to send music over.

“That’s how his cover of Scritti Politi’s ‘A Perfect Way’ came about. He also dug Mr. Mister and recorded an unreleased version of ‘Broken Wings’ and also covered Cyndi Lauper’s ‘Time After Time’ and Michael Jackson’s ‘Human Nature.’

“He recorded with Prince, Toto, and Cameo,” Wilburn adds. “He dug the sound of the Eighties and he used that vibe for the Rubberband sessions.”

Wilburn is confident that Davis would have relished the newly finished Rubberband album.”