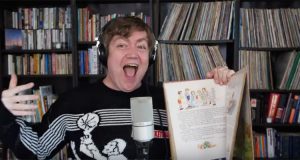 Wesley Charles Tank has been performing art rap in Milwaukee under various pseudonyms since 2002. He has been a driving force for multiple Milwaukee projects such as Sun//Decrease, Antler Antennas, Stumblesome and more. Having performed most often as “WC Tank” in a variety of forms (including backed by Riley Lake and The Fatty Acids), Tank has worked across the years with a solid roster of varied local collaborators.

Lately, Tank has, with lightning speed, reached audiences around the world with his “Fox In Socks: Dr. Seuss Raps Over Dr. Dre Beats” video. That one video, alone, has garnered millions of views and he’s since gotten coverage from SPIN, CNN, HuffPost and even made Reddit’s front page.

Tank was since approached by Canada’s Kidoodle.TV to create original content pulled from the public domain (such as “The Three Little Pigs”) and be the face of their first original show. StoryRaps was born and features not only Tank’s talented reworkings and rappings but also features a bevy of his longtime local artist friends who help keep that rhyming rap boat afloat.