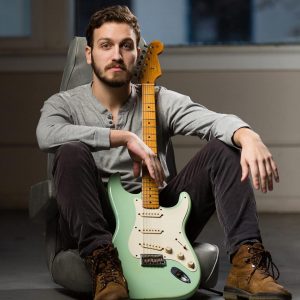 Milwaukee artist Cullah is a multi-disciplinary musician and engineer who has written, recorded, and released an album every year on April 27th (his birthday) since 2006. Each album reflects the eclectic musical styles that Cullah draws from — an autobiographical journey of musical expression.

Cullah & The Comrades play a spectacle of Milwaukee strut-n-stroll rock -n- roll. Backed by talent of The Comrades, Cullah’s ability to bend and transcend genres leads for an exciting and captivating performance through style and sound. Cullah’s unassuming presence exists in stark contrast to his voluminous vocals.

Tune into WMSE’s Local/Live on Tuesday, April 23 for a live set from Cullah & The Comrades. Cullah will be one of the local artists featured for 2019’s Chill On The Hill season lineup; tune in to hear more about Cullah’s music and get a sneak peak at this year’s full Chill On The Hill lineup as well. WMSE.org to stream live or in the archives or simply tune your radio to 91.7 FM at the 6 o’clock hour.