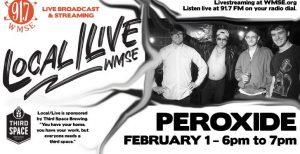 On Tuesday, February 1st, WMSE looks forward to bringing its listeners local and live music over the airwaves for a livestreamed Local/Live at Anodyne on Bruce via Kneeverland Productions. Our guest this time around is Milwaukee-based hardcore punk band, PEROXIDE.

Although PEROXIDE has been around the Milwaukee scene for a couple years, the band’s more recently-redesigned lineup and subsequent debut release has brought them into the spotlight. Featuring members of Platinum Boys, Rio Turbo, Holy Sh$t!, Beach Burial and Gorilla Knifefight, PEROXIDE has umpteen years spent in the scene under their collective belts.

TWISTED IN THE WILD is PEROXIDE’s first album and the band celebrated its release with a show in late-November at The Mothership in Bay View. Their debut is filled with churning guitars, smashingly compact percussion and the place-appropriate sneer of Joey Turbo as he sings about “Sweat Dreams” and other adventures in the life of a punk.

Join WMSE and PEROXIDE by livestreaming the show over at WMSE.org and on WMSE’s YouTube channel (through Roku), Vimeo and social media accounts. Or just listen live at 91.7 FM on your radio dial. It all goes down at the 6 o’clock hour.

Local/Live is sponsored by Third Space Brewing. “You have your home, you have your work, but everyone needs a third space.”