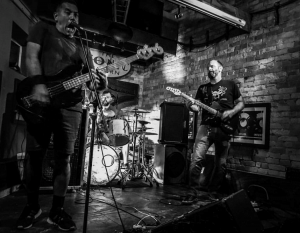 Magnetic Minds originally formed ten years ago as a two-piece. Two years later, singer and bassist Chris Ortiz and drummer Tim Wick wrote and released their first full-length album, Audio Rorschach, a heavy, rhythmic rock and roll record bent on fusing Beatles-esque melodies with stoner-rock riffing. The duo played extensively in celebration of that release but then laid Magnetic Minds to rest to work on other projects.

In 2016, Magnetic Minds was resurrected and ignited with a new energy and dimension brought on by adding longtime friend, Jim Welniak on guitar. They immediately fell to writing material, recording five songs that would become the recently-released EP, Recompose. Working with WMSE engineer Billy Cicerelli on the album yielded fantastic results and the band re-joined with him to record two more songs at the WMSE studios which will be a new 7”, releasing this summer. Magnetic Minds have devoted solid time to the stage, reveling in their chosen genres of punk, death-metal, prog and more.

WMSE Music Director Erin and Local/Live co-host Cal Roach will interview Magnetic Minds in between songs with the help of our audience (and audience participation is encouraged!).

Join WMSE with Magnetic Minds at Club Garibaldi (at 2501 S. Superior Street in Bay View) for another not-to-be-missed live radio show. Doors are at 5:30pm and if you can’t make it, listen live over the airwaves (or in the WMSE archives) at the 6 o’clock hour.

This 21+ event is FREE and open to the public.