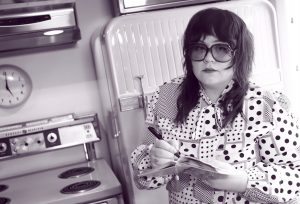 Abby Jeanne was born Abigail Jeanne Gurn-Schlicht in Milwaukee on August 21, 1992, the daughter of an elementary school teacher / poker champion mother and a cross-dressing / chef / drama king father who met in a local theater production. An introverted child, she submerged herself in art, books, cigarettes, psychedelics, coffee, more psychedelics and 60s pop music before releasing her self-recorded, debut album Rebel Love in 2017. Her mighty vocals and raw lyrics use the power of love to shake up, heal and translate trauma and have endeared her quickly to her rapidly-growing admirers.

Since that debut album, Abby Jeanne has put out several 45s, hosted extravagantly-produced events, solidified a full backing band and relocated to Los Angeles and New York City, respectively. She is currently holed up in a New York studio, putting the finishing touches on a brand new record. We sat down with Abby recently to hear the story of her beginnings in Milwaukee, the call of the road and where that road will take her, next.

Catch episodes of WMSE’s Local/Live interviews by tuning in at the 6 o’clock hour. WMSE.org to stream live or in the archives or simply tune your radio to 91.7 FM in Milwaukee.