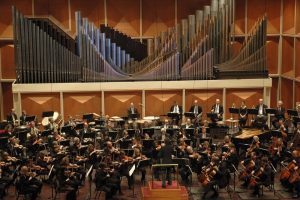 Beginning Sunday, Oct. 6 at 3 p.m., WMSE will broadcast the Milwaukee Symphony Orchestra’s 2019 season. Since it’s founding in 1959, the MSO has continued to be one of the country’s most artistically vibrant and innovative orchestras. This tradition has been enjoyed by millions nationwide since 1971 with the MSO’s radio series – the country’s longest-running national classical radio series. The MSO’s full-time, professional, virtuosic musicians excite listeners with over 130 live concerts across Wisconsin each season. A selection of these are featured on the orchestra’s broadcasts, which feature exclusive behind the scenes and backstage musician commentary.

“Anti-established” in 1981, WMSE 91.7 FM – Frontier Radio has grown into Milwaukee’s truest and longest standing music radio institution, offering a 24 hour free-form format representing every musical genre in one form or another. A financially independent department of Milwaukee School of Engineering (MSOE), WMSE has been primarily funded by listening supporters and community partners since 1997, genuinely earning the station the motto Community-Powered Independent Radio. Founded upon the principle of educating listeners through a wide selection of musical programming not heard anywhere else in the market, WMSE has been the clear leader in supporting Milwaukee’s diverse community of musicians and artists. Every Tuesday at 6PM a different area band performs live in the WMSE studios on the Local/Live segment. Each weekday at 1PM the Local Lunchbox segment features only local music.