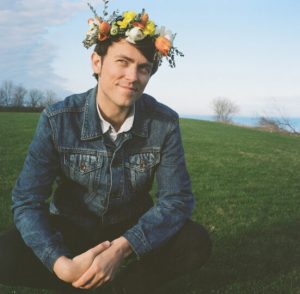 In 2019, Milwaukee’s Trapper Schoepp hit a songwriter’s jackpot: a co-write with Bob Dylan. And the circumstances were wildy serendipitous. On the day Dylan entered Columbia Studios in 1961 to begin recording his first studio album, he wrote a song about Wisconsin. The lyric sheet sat unseen with a former roommate, and was later unearthed and put up for auction at $30,000. Schoepp saw the story and seized the opportunity to set music to words. After Schoepp’s effort, he was granted Dylan’s approval to jointly publish the song. This 57-year-collaboration–“On, Wisconsin”–led to features in Rolling Stone and Billboard, an album called Primetime Illusion produced by Wilco’s Patrick Sansone, and nearly a hundred international tour dates. But other ventures in the singer-songwriter’s life weren’t as fulfilling.

Schoepp spent the summer prior to the release of Primetime Illusion at the Hotel Astor, a historic 1920s hotel he describes as having “the air of a haunting Stephen King novel.” Indulging in the spookiness of his transient lodgings, Schoepp went on a ghost tour of Milwaukee, and as the specters saw fit, the tour ended back at the very hotel where he was staying. The guide shared the story of a 1935 fire that claimed the lives of a nurse and her patient, a deaf man who did not wake to the nurse’s pounding at his door. With creative liberties, Schoepp reimagined their story into “Hotel Astor.”

Schoepp explores themes of ghosts and rebirth, springtime and renewal on his album, May Day– out 5/21/21 on Grand Phony Records. “May Day is an ancient holiday that celebrates the arrival of springtime, the natural world and also workers’ rights. It’s also my birthday,” Schoepp says with a laugh. “After this trying winter, we found solace in making an album for the spring.”

May Day, the halfway point between the spring equinox and the summer solstice, has historically been observed with dancing and singing around a maypole. Schoepp’s album cover features a Roaring Twenties era photo of women dancing around a maypole alongside the Washington Monument, which was found in a Library of Congress archive by his brother and bassist/singer, Tanner Schoepp, and adapted into album art by designer, Daniel Murphy (Bon Iver, The War On Drugs).

“I was born on the first day, fifth month called May/I’m here today to say I need you in the worst way,” Schoepp sings in the opening title track. Against a driving Springsteen-esque beat, Schoepp tells a transcontinental tale inspired by an untenable living situation he faced weeks before departing on a European tour. “I woke up with a frantic sense of urgency the morning the piano movers came. I finished ‘May Day’ as they were pulling up, thinking I owed it to the piano to write one more song on it.”