With an unusual name, Teutonic beats and aggressive sound, it is often assumed that Nitzer Ebb originated within the German techno scene, but the truth of the matter is that this trio hailed from theUK,ChelmsfordinEssexto be precise. Formed in 1982 by school friends Douglas McCarthy [Lead vocals, guitar], Vaughn ‘Bon’ Harris [vocals, percussion, guitars] and David Gooday, [percussion], Nitzer Ebb were influenced by the harder sounds of the early techno pop scene, distilling elements from several other genres too until they had created their own identifiable sound, characterised by extremely powerful rhythms, minimal sequenced hooklines and fierce, chanted lyrics. 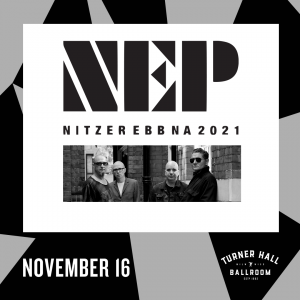