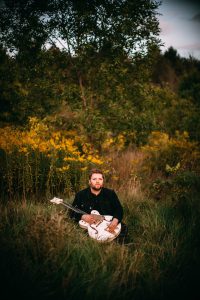 Milwaukee-based musician Carlyle has been active in the local music scene for nearly twenty years, originally a drummer for local acts such as Heart of a Failure and WAMI award-winning Blue Background as well as the lead guitarist and singer for Dangerfield.

Four years ago, he teamed up with longtime friend and collaborator Saebra Laken, to form Saebra & Carlyle, a project that went on hold during the pandemic. Since, Carlyle has written and recorded his first solo album Love, Loyalty & Doubt, where he performed nearly all of the instruments. Carlyle’s solo work evokes the influences and sounds of Fleetwood Mac and Tom Petty, artists he grew up with and admires to this day. Join us on October 26th to hear about Carlyle’s debut record and his next steps as a solo artist.