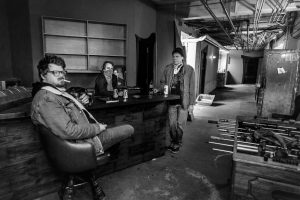 Due to technical difficulties this past Tuesday, October 19th’s broadcast of Local/Live wasn’t able to air in its entirety. With that, WMSE will be re-broadcasting the full, one-hour segment so our listeners can enjoy the segment in full as soon as possible during the Local Lunchbox segment on the Von Munz Vinyl Variety Show. Tune in at 1 p.m. – 2 p.m. on Thursday, 10/21 to hear our conversation with Milwaukee’s Primitive Broadcast Service about their just-released record, Colors For Chameleons!

Milwaukee’s Primitive Broadcast Service is a three-piece noise rock colossus. Described as “Neil Young meets Joy Division” and likened to Unwound, Husker Du and “Sonic Youth at their height when everything was raucous and slightly off key”, Primitive Broadcast Service quickly reclaimed the momentum and swagger they had prior to the pandemic, and are ecstatic to release their 2nd album, Colors for Chameleons in mid-October.

The new album, long in the making throughout the pandemic, represents a bit of a shift from the dissonant, psychedelic sprawl of the band’s first album to a more taut, skronky approach; there’s a Chicago noise influence at work and the new album version is just a bigger, heavier slab of urban SKRONK. Tune into Local/Live on October 19th to learn more.