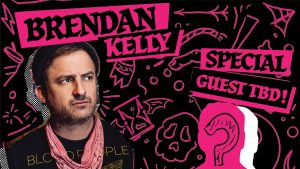 Brendan Kelly has been voted “Best Twitter” by Chicago Reader, was a TV Host, is the guy behind Nihilist Arby’s, sings in The Lawrence Arms, works at The Onion, makes weird art… the list goes on. Now after a couple years crafting deviant songs he has something new for his cult to consume: a 10-song album called Keep Walkin’ Pal. He releases his “solo” material under the name Brendan Kelly and the Wandering Birds, but this is not some emo boy with a guitar or another “punk goes acoustic” outing, this is an artist collective like Wu-Tang Clan or Crass. It involves musicians, visual artists, studio nerds, and even a college film professor. We’re not sure how to describe this wild record (Space Rock? Chiptune?), but we know it’s a likable mix and a real departure from what you’re used to hearing from Brendan and this scene.