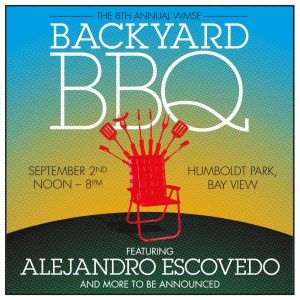 The legendary Alejandro Escovedo will headline WMSE’s Backyard BBQ on Saturday, Sept. 2. The renowned songwriter and singer primarily plays the guitar, and has played a variety of rock genres and alternative country. He was named “Artist of the Decade” by No Depression magazine in 1998, and has collaborated with Ryan Adams and Whiskeytown.

“We feel so lucky to have secured such an incredible artist to headline this year’s Backyard BBQ. Alejandro with a full band is a force to be reckoned with. You will not want to miss what will surely be one of the most talked about shows of the summer,” said WMSE GM Tom Crawford.

Escovedo’s newest record, Burn Something Beautiful, was described by Rolling Stone as, “Continuing the singer’s penchant for a shadowy mixture of punk, roots and rock, the record is low on gloss and high on assertive guitars and restless percussion, mature in subject matter but never composition. Escovedo may be in his sixties, but he doesn’t temper the distortion or feedback for aged ears.”

Yummy restaurants including Foltz Family Market, Nightmare’s, Pig Tailz, Paulee’s Barbacoa, Pedro’s South American Food, and Happy Dough Lucky will be on site providing the nourishment you need for a day of music and fun. Colectivo Coffee will serve their cold-brew coffee as well.

All the fun takes place Saturday, Sept. 2 from noon to 8 p.m. in the station’s even bigger backyard—Humboldt Park, right in the heart of Bay View at 3000 S. Howell Ave. It’s the station’s small thank-you to its listeners and members for their continued support.