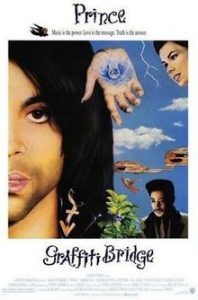 I have two distinct Prince-related memories from high school that will always color my thoughts on his Purpleness.

The first is the badass John F. Kennedy High School marching band playing “Housequake” during halftime at a football game and later at the Thanksgiving parade.

Their wild rendition culminated in everyone in the band but the drummers putting their instruments down on the ground and then dancing suggestively over them as the drummers pounded the big beat of “Housequake” over and over.

This was probably frowned upon by the PMRC, who were no fans of Prince, but I don’t know if they had an official stance…

My second memory is of Coach Vernon Lee’s anti-drug lecture in health class in which he discussed the link between peer pressure and drug use. If you overdosed and died, he told us, your so-called friends would forget you and be dancing to Prince the next day with their headphones on. Then he did a quick little dance and sang a Prince song that I can’t remember, but I’ll never forget Coach Lee’s smiling, finger-snapping “death wiggle.”

This all brings us to 1990’s Graffiti Bridge, a movie written and directed by Prince that is an unofficial sequel to his much more beloved Purple Rain (1984). Let’s Forecast:

Graffiti Bridge racked up five nominations at the 1991 Razzie Awards, which “honors” the worst in film. But 1991 was the year of John Derek’s extraordinary stinker Ghosts Can’t Do It, which took four awards, including Worst Supporting Actor, which went to none other than Twitter’s Donald Trump, who played himself and won thanks to dramatic exchanges like this with Bo Derek’s character:

“Donald Trump: Be assured, Mrs. Scott, that in this room there are knives sharp enough to cut you to the bone and hearts cold enough to eat yours as hors-d’oeuvres.

Katie O’Dare Scott: You’re too pretty to be bad!

The Time’s Morris Day returns from Purple Rain as Prince’s rival. Day managed to be a part of two Razzie-nominated movies from 1990; he also portrayed Don Cleveland in the Andrew Dice Clay-vehicle, The Adventure of Ford Farlaine, which shared the Worst Picture award with Ghosts Can’t Do It.

Siskel & Ebert also trashed the movie, calling it a “flat out, low-energy film” without a standout musical sequence and one that made them wonder if Purple Rain was a fluke. Ouch.

In Matt Thorne’s 2016 Prince biography, the thoughtfully titled Prince: The Man and his Music, he dedicates a chapter to Prince’s Graffiti Bridge era called “What’s Wrong With Graffiti Bridge?” Thorne offers Prince’s response to the film’s backlash, “It was nonviolent, positive and had no blatant sex scenes … Maybe it will take people 30 years to get it. They trashed The Wizard of Oz too.” Thorne goes on to contradict Prince’s comments with examples from the movie and especially hits the movie’s “troubling gender relations.” The chapter also frames the Graffiti Bridge era musically as an “end point to Prince’s peerless run of pop achievement.”