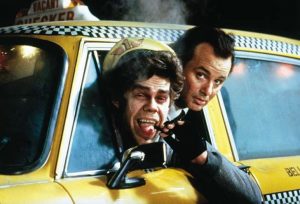 Half the fun of Scrooged is seeing which dead star will pop up next in the movie: Robert Mitchum – that’s right! Buddy Hackett – indeed! Miles Davis – no, s*$#! And there’s plenty more where that comes from – and by-gawd the Solid Gold Dancers!

So much has already been written about Scrooged, which turns 30 this year, but here are some ponderable tidbits for your Freak Show viewing:

David Johansen is a blast as the taxi-driving, Bobcat-booze-snagging Ghost of Christmas Past. But his former bandmate in the New York Dolls, Arthur “Killer” Kane, had fallen far from the limelight when he saw Johansen in his Scrooged role while watching television. In his excellent 2005 documentary about Kane, New York Doll, Greg Whiteley uses Johansen’s appearance in Scrooged to frame Kane’s trip to rock bottom and subsequent recovery and reunion with the New York Dolls. It goes something like this: Kane sees Johansen in Scrooged; he get incredibly drunk on Peppermint Schnapps; he assaults his wife; his wife leaves him; he jumps out of his apartment window, leaving him alive but with permanent damage to his body; he converts to Mormonism and goes to work at a Mormon library, where he is loved; more things happen; Morrissey says, “Hey, the New York Dolls should reunite”; and the New York Dolls reunite. Sadly, Kane would die just a few weeks after the reunion shows in 2004.

Screenwriters Mitch Glazer and Michael O’Donoghue adapted Scrooged for the screen from Charles Dickens’ oft visited A Christmas Carol. Most famous for his work on Saturday Night Live and the cult spoof, Mr. Mike’s Mondo Video, O’Donoghue was a major meanie about the finished movie. He is quoted in The Big Bad Book of Bill Murray, calling Scrooged a “piece of unadulterated, unmitigated s*$#.” “The only good thing is that big checks came out of Scrooged, which allowed me to get a home in Ireland,” says O’Donoghue, who died in 1994.

As I mentioned earlier, Scrooged is juiced on star power, and I’m not just talking about Mary Lou Retton as Tiny Tim. Thunderbird wine plays a prominent part thanks to Anne Ramsey, who passed away the same year. And lucky you, the word is again Thunderbird!