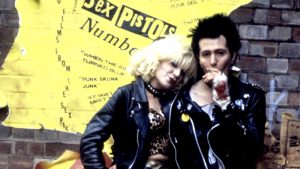 In the Internet-less days of my youth, I regularly made mix tapes from songs I taped off the radio. In college, I called the request line at WZMB (East Carolina’s then-freeform student station – Zombie Radio) and asked a DJ not named Alexa to play songs I had read about in magazines like Spin and Option or maybe saw in a record store, and then I would use my recordings to make tapes with songs by groups like the The Wonder Stuff, Government Cheese and Smudge and weird titles like “The Weezy Jefferson Memorial Tribute” and “Songs About Goat Poop.”

Sometimes I would include the DJ’s intros or outros to the songs on my mix if they said something interesting, and still today when I hear those songs, they don’t sound right without the DJ’s commentary that has been become graffiti on my brain. Once, I requested Sid Vicious’s version of “My Way,” the classic video for which is recreated notably in Sid & Nancy, this month’s Friday Night Freak Show. I still remember the DJ’s introduction for “My Way”: “Here’s my cool request of the day. It makes me want to put on a leather jacket, smoke a cigarette and look real cool.”

Certainly, “Cool” is not what you come away with from Alex Cox’s downbeat yet powerful 1986 biopic about Vicious and girlfriend/drug buddy/murder victim?/suicide partner? Nancy Spungen. Sid’s rebel snarl and the leather jacket are there too, but “pathetic,” “horrible,” and “sad” are the words that stick with you as the doomed lovers devolve and suffer decidedly uncool, dope-fueled deaths.

Here again are a few tidbits to keep you company during the movie:

Marshall Crenshaw’s great music-related movies book, Hollywood Rock: A Guide to Rock‘n’Roll in the Movies, gives credit to Cox, who turned 31 during filming of Sid & Nancy, for succeeding despite the aforementioned horribleness of the couple’s story: “The flash in the zeitgeist that was the Sex Pistols is almost secondary to the sad, touching, and ultimately tragic tale of love gone sour and then blue. … To rank this film in terms of enjoyability is pointless; it’s a tough, unflinching gaze through half-closed eyes at a lifestyle that kids should definitely not try at home.”

A pre-Cox version of the Sid and Nancy story envisioned Madonna and Rupert Everett in the title roles. Interestingly, the Material Girl’s former best friend Sandra Bernhard was briefly considered for the role of Sid once Cox was on board. Eventually, the battle for Sid came down to Gary Oldman, who won out, and Daniel Day Lewis.

According to Cox, in his book X Films: True Confessions of a Radical Filmmaker, cast members were appalled by the extras in the movie who were “seriously into the punky thing” and, striving for authenticity, spat on the stars as they performed as the Sex Pistols. Cox said he decided not to discourage the extras because he felt it was part of a music scene they were trying to re-create.

In England’s Dreaming: Anarchy, Sex Pistols, Punk Rock and Beyond, Jon Savage describes the demise of Sid and Nancy as emblematic of punk culture: “The most terrible thing about Sid and Nancy’s self-destruction was that it was entirely expected, as a logical conclusion, not only to their individual life trajectories, but to the culture whose sickness they embodied.”

Your best way to see the real-life Sid and Nancy interact (or at least Nancy talk a lot and Sid try to stay awake) is in Lech Kowalski’s D.O.A.: A Right of Passage. An excerpt from the famous punk documentary is included on the Criterion’s highly recommended DVD release of Sid & Nancy. Extras include an interview with Cox, a 1987 documentary of the making of the film and the Sex Pistols’ swear-filled 1976 television interview with Bill Grundy.