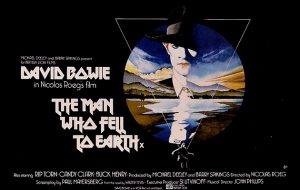 Aliens, alienation and … gin and tonics?

At least two of those words fit quite well with everything we already know about David Bowie, so it seems he would be a perfect fit for Nicolas Roeg’s The Man Who Fell to Earth. And indeed, so did the late director and others responsible for bringing Walter Tevis’s novel about an extraterrestrial’s visit to Earth to life in 1976.

In Watching The Alien, a featurette about the film, Roeg indicated he wanted a non-actor for the role who could make him believe in the reality of Thomas Jerome Newton, who travels from a dying planet that he desperately wants to save, only to find loneliness, greed and, you guessed it, gin and tonics. After viewing a BBC documentary about Bowie, Cracked Actor, they knew they’d found their T.J. Newton in the rock star. Co-star Candy Clark recalls Bowie as being at his “most beautiful” at that point in his career, at point at which Bowie indicated he was also his “most drugged out.”

Here again are a few points to ponder during your Freak Show trip with The Man Who Fell to Earth:

Let’s start with the epigraph at the beginning of Tevis’s novel, which comes from American poet Hart Crane:

And so I entered the broken world

To trace the visionary company of love, its voice

An instant in the wind (I know not wither hurled),

But not for long to hold each desperate choice.

Tevis, who died in 1984, also wrote two other novels that became movies you just might have heard of, The Hustler and the Color of Money.

The Psychotronic Encyclopedia of Film (1983) dug the movie and Bowie’s performance immensely. Bowie’s music career? Not so much: “David Bowie makes a great alien and this fascinating science-fiction film will be revived in the future long after most of his derivative rock albums land in the cut-out bins.” Alert, Target!

The music that Bowie made for the film did not fit Roeg’s vision. Ultimately, John Phillips of the Mamas & Papas quite capably served as musical director after scoring the movie with Pink Floyd’s Dark Side of the Moon was ruled too costly. Bowie’s songs surfaced on his 1977 album Low.

In the 2013 book The Best Film You’ve Never Seen, Trainspotting director Danny Boyle describes Roeg’s approach as a director: “He tries to disorientate you, and he wants you to be in a state where you’re not ready for it.” Indeed, get ready to not be ready for The Man Who Fell to Earth!

Finally, I can never turn away from a chance to include a Roger Corman connection. Roeg was cinematographer for Corman’s celebrated 1964 Poe adaptation The Masque of the Red Death. Meanwhile, writer Paul Mayersberg, who adapted The Man Who Fell for Earth for the screen, was an uncredited production assistant on The Masque of the Red Death and Tomb of Ligeia, on which he also had an uncredited writing contribution, according to IMDB.

A 4K restoration of The Man Who Fell to Earth is part of WMSE’s Friday Night Freak Show series on Friday, Jan. 11, at the Times Cinema, 5906 W. Vliet Street, Milwaukee. DJ Haven spins at 8pm and the movie starts at 9pm.