Hope Sandoval at the Pabst Theatre This Sunday… 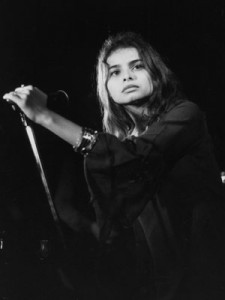 This Sunday brings Hope Sandoval, the ethereal-voiced vocalist of the 90s’ Mazzy Starto The Pabst for a performance with her group the Warm Inventions. Sandoval has just released her first new album since 2001′s Bavarian Fruit Bread, called Through the Devil Softly, on which she collaborates with drummer Colm O’Ciosig of My Bloody Valentine. NME says that Through the Devil Softly “Sounds like Billie Holiday’s final radio transmission to troubled earthlings from her home beyond the stars” and Rolling Stone points out “She purrs every song in slow motion — but given lyrics like ‘We’re like the roses/Stoned in the backyard’ [that] that’s probably the point”.

Sandoval has also collaborated on vocals with Air, The Jesus & Mary Chain, Twilight Singers, Vetiver, Massive Attack and The Chemical Brothers and is known in her live performances for playing in near-darkness. For some, this might be puzzling, but given Sandoval’s penchant for gauzy sounds and slight stage shyness, this might all the the more add to the intriguing mystery.