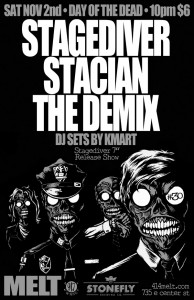 Hey Milwaukee, if you’re reading this before 6 p.m. on Friday, that means the pledge drive is still going on–what are you waiting for?? It’s not like you can’t donate your hard-won dollars and cents any time you feel like it, but rest assured, WMSE needs ’em. We know a lot of people tune out during pledge drives, but we also like to think that WMSE listeners develop relationships with the DJs here, who put so much heart and soul into what they do, especially during the drive. For some folks, pledge drives are the most fun times of the year, believe it or not. It’s not just a bunch of begging for cash; it’s a time when the DJs’ personalities really come to the fore, so get in the spirit of giving and stay tuned in today! And whether now or down the road, please consider doing what you can to help keep the greatest radio station in town alive. And now, back to your regularly-scheduled list of stuff to do for the coming week…

Hey, whaddayaknow? There’s another film festival going on this weekend! You might be saying to yourself, “Huh? I haven’t heard anything about another film festival.” Well, it’s the Turkish Film Festival, going on at the UWM Union Theatre, so it’s probably a little fringe-y for the mainstream media, but of course that’s why we at WMSE have to tell you about it! The event runs all weekend, and if you click here and read about some of these flicks, we’re pretty sure you’ll find something intriguing, because if you’re into WMSE, chances are the mainstream isn’t really your thing anyway…

You could get your weekend started with some comedy–although it’s certainly not something you’d consider stand-up. Humorist David Sedaris is likely to make you uncomfortable from time to time, but he will make you laugh like nobody else. He details painfully awkward moments in his life, but his visage of deadpan defiance comes through at all times, making even the failures feel like hilarious triumphs. A guy with a talent for words like Sedaris can turn any mundane occurrence into art, so it scarcely matters what’s actually happening in his stories; his observational and psychological tangents are half the battle and the intuitive narrative arcs are the rest. See him tonight (Friday) at the Pabst Theater.

Or, if you’re really gung-ho on seeing some live music (and who could blame you??), you could head up to Stonefly tonight for the scrappy, eclectic rock and roll of Kane Place Record Club. We sometimes get the feeling that this band is constantly in the process of defining itself; you never know if you’re going to get the old-timey soul-type stuff or a more modern sound, the goofy, sweaty party band or the more serious indie-rock stylings that are more prevalent on the recently-released self-titled album (and each aspect of the band has its strengths and weaknesses), but you can usually count on an enthusiastic good time when it comes to the live show, which is definitely how this band built its following. So go see what all the hype is about! Also playing: Newlybreds, D’Amato.

Also, we mentioned this last week because it started Thursday night, but tonight and tomorrow, the Umphrey’s McGee annual Halloween mashup party continues at the Riverside, and we wouldn’t want to shirk our duty by not reminding you. If you like metal, jazz, prog, funk, electronic, country, or practically any other style of music, you’ll probably like at least parts of an Umphrey’s show, but you’re a WMSE listener, so you probably like a variety of different genres, which means you’re even more likely to dig this band. Even if you hate the notion of the jam band, we recommend giving these guys a shot, because they’re a far cry from the aimless noodling you expect when that term pops up. They’re all about huge dynamics and mind-blowing musicianship, and you’re sure to be impressed.

If you haven’t gotten enough dancing in for the weekend by Saturday night, you might want to head to Stonefly for the thirtieth installment of Milwaukee’s premier experimental electronic music party, known as MELT. Curated as always by The Demix, this month’s installment functions as a 7″ release party for Stagediver, whose chaotic EDM should be a perfect creepy soundtrack for your last night of Halloween revelry. Same goes for Stacian; her stuff is more haunting synthpop but we’d put the emphasis on “haunting.” Also performing: DJ Kmart.

Otherwise, you could head to Turner Hall on Saturday night for a spectacle you’re unlikely to see anywhere else in Milwaukee! That’s right, it’s Mondo Lucha! This is our city’s version of the increasingly popular Mexican wrestling tradition known as lucha libre; you’ve seen the masks, and you’ll see them here, but in this case, the show is about much more than just the wrestling. You’ll see an array of burlesque performers, bizarre sideshow acts and, of course, music. For this, its fifth anniversary celebration, you get the local glam-rock party band known as Tigernite, who you may have caught tearing up the WMSE airwaves this past Tuesday on Local/Live. Mondo Lucha is a multi-sensory explosion that gets crazier with each event, so catch it now before they make it illegal.

Next Wednesday, hit up Linneman’s for a mid-week breather with the soothing sounds of Myles Coyne & The Rusty Nickel Band. Okay, maybe “soothing” isn’t the best word; these guys are positively full of energy and are more likely to get you up and dancing than mellow you out, although there will probably be a folky ballad or two on the setlist. Check out the band’s new album on Bandcamp right here; we’re pretty sure you’ll be enticed. Also playing: The Sleepwalkers, The Cavewives.