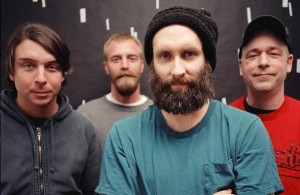 If you ever wondered how we keep on top of the weekly goings-on around town, Milwaukee, we’ll let you in on a little secret: We pore through the events calendar at AV Club Milwaukee. As you may have heard, it’s only a matter of weeks before that disappears forever, which has us feeling a little down this week. That’s a sizable amount of local music and arts coverage and civic commentary going down the tubes, as well as a big supporter of your favorite radio station. But we’re not losing hope; the Brew City has this amazing community and it demands coverage, so something’s got to rise up out of the ashes, right? In the mean time, we’ll try to stay on top of things week to week, and hopefully there won’t be too many things that fall through the cracks. Read on for a few upcoming events you may want to attend…

Indie rock progenitors/legends Built To Spill are coming to Turner Hall tonight (Friday), which is, um, really good news for people who like good music. Okay, confession: We haven’t heard their latest album, but the thing is, the prospect of hearing only a handful of tunes from the 1997 classic Perfect From Now On live is seriously enough to warrant a night out downtown. Plus, these guys have been known to play a Captain Beefheart cover on occasion, so obviously, whatever the chances may be, how could you live with yourself if that happened and you weren’t there to witness it? Also playing: Slam Dunk, The Warm Hair.

There’s one local release that seems to have flown under the radar for some reason, all the more puzzling considering the ongoing citywide obsession with the genre umbrella known as Americana. Buffalo Gospel came together out of the ashes of folk-rock jam band Fat Maw Rooney, adding vocals by Heidi Spencer and her Rare Birds bandmate Allen Coté on guitar and lap steel. The resulting full-length, We Can Be Horses, showcases a major leap in songwriting for bandleader Ryan Necci, as well as the most unapologetically twangy country music Milwaukee has produced in some time–the old-fashioned kind, not the slicked-up modern poppy kind. You can check the band out Saturday night at Club Garibaldi, where they’ll be joined by the recently-reactivated Scarring Party, whose live shows should not be missed, as well as ex-.357 String Band troubadour Joe Huber. This is guaranteed to be an amazing night of music, folks.

Saturday night is also another banner record release party at Cactus Club, this time for Midnight Reruns, a band you may have heard tearing up the airwaves live from the WMSE studios on Tuesday as the debut performers on the new, revamped version of Local/Live–and we couldn’t have hoped for a better start to the new era. These guys play straight-up rock and roll with no prefixes or qualifiers, like a modernized Thin Lizzy with a punk rock heart and warm, Midwestern pop sensibilities that would make Cheap Trick jealous. Their self-titled debut full-length is gonna make you wish it was summer and you could be cruising around on back country roads with all the windows down–hey, do people still do that? They’ll be joined by hardcore outfit Direct Hit! and the garage punks of Slow Walker, both of whom have new albums out this year as well; click their names for Bandcamp links.

Sometimes you need to see a band that pumps out raw energy with an audible and visual fury; there’s no better way to get your aggressions out, right? We’ve got your prescription for Sunday night: Terrible Twos at Cactus Club. We’re guessing the guys in this band are super mellow in real life, because when they’re onstage it’s a nonstop barrage of pummeling beats, icy keyboards, rip-roaring guitars and screaming and jumping around like madmen. This is pretty much the most extreme post-punk we know of, unbridled anger and frustration in musical form; the new Horror Vacui does a pretty good job of capturing the frenzy of their live show. It’s like if Devo got very, very violent. Plus, local standard-bearers for straight-up punk rock, Holy Shit!, will be there too, and they’re frickin’ rad.

Next Thursday, it’s another installment of the popular MTV…whoops, we meant MKE Unplugged series, going on in room 250 in the Helene Zelazo Center for the Performing Arts at UWM. This event features local sister duo Vic And Gab, who made waves earlier in the year when Spin started pimping their new album Love Of Mine and the video for “Let You Down.” The accolades are well-deserved; Love Of Mine is full of super catchy, mellow jangle-pop that draws from classic 80s and 90s sounds like Throwing Muses and Belly without coming off as retro. It’s one of those albums that makes you think, what could possibly be keeping this music from being hugely popular? Of course, predicting the shifting whims of the music industry is impossible, but we still say you should catch these ladies live before they become massive stars, just in case! Opening the show: Mike Van Toll.