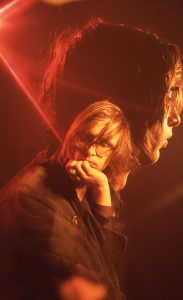 “Like a hand yanked from a slammed door, the dark outsider pop of Black Thumb emerges bruised and fragile. Colin Wilde, who has been known to play organ for Wisconsin punks Tenement [as well as Appleton’s DUSK], began Black Thumb as a solo project back in 2012 and is now seeing the release of his debut cassette It Is Well With My Soul through Forward Records (Radiator Hospital, Pity Sex).

“On first listen there’s a heavy nod to the early UK indie psych sounds of Spaceman 3 but also a lot of midwest pop and punk. Playing though his 1967 Vox Super Continental, Wild produces music that is gloomy but also hooky. Featuring appearances from members of Dusk, Tenement, and Technicolor Teeth, the album was recorded and produced by Wilde and Matt Stranger in the Crutch of Memory studio in their home in Appleton, Wisconsin.”

Tune into WMSE’s Local/Live on Tuesday, June 11th for the music of Appleton’s Black Thumb as he gets ready for some summer shows and beyond, surrounding his semi-shelved 2016 release, It Is Well With My Soul. WMSE.org to stream live or in the archives or simply tune your radio to 91.7 FM at the 6 o’clock hour.