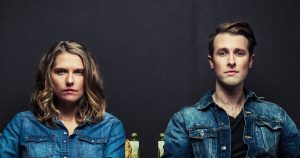 WMSE’s Local/Live once again returns to Club Garibaldi’s for another awesome Local/Live segment that YOU can join!

On Tuesday, March 6th, we welcome Milwaukee folk group, Dead Horses for a live show and interview on-site and over the airwaves.

At fifteen, Dead Horses frontwoman Sarah Vos’ world turned upside down. Raised in a strict, fundamentalist home, Vos lost everything when she and her family were expelled from the rural Wisconsin church where her father had long served as pastor. What happened next is the story of Dead Horses’ stunning new album, ‘My Mother the Moon,’ a record full of trauma and triumph, despair and hope, pain and resilience.

Blending elements of traditional roots with contemporary indie folk, the album is both familiar and unexpected, unflinchingly honest in its portrayal of modern American life, yet optimistic in its unshakable faith in brighter days to come. Earthy and organic, Vos’ songs often reveal themselves to be exercises in empathy and outreach; she writes not only to find meaning in the struggles she’s endured, but also to embrace kindred souls on their own personal journeys of self-discovery…

‘My Mother the Moon’ is Dead Horses’ third album, and it follows hot on the heels of their acclaimed 2016 release, ‘Cartoon Moon,’ which Wisconsin Public Radio called “equally beautiful and effortless.” That record prompted the Milwaukee Journal Sentinel to declare Dead Horses a Band To Watch and earned them honors for “Best Album,” “Best Americana/Bluegrass Artist,” and “Best Female Vocalist” at the 2017 WAMI Awards. American Songwriter called Vos “a compelling vocalist…who carries every tune with her husky, deeply emotional tone that feels lived in and real,” while No Depression hailed her songwriting as “beautiful and fresh.” With a fleshed out touring lineup, the group logged countless miles, sharing bills along the way with Trampled by Turtles, Mandolin Orange, and Elephant Revival in addition to making festival appearances from Bristol Rhythm and Roots to WinterWonderGrass.

You can join WMSE and Dead Horses at Club Garibaldi’s as we team up for this live radio show. If you can’t make it, listen live over the airwaves (or in the WMSE archives).

As always, WMSE Music Director Erin Wolf and co-host Cal Roach will lead Dead Horses through questions in between the live performance with the help of our audience (audience participation is encouraged!).

This is a 21+ event which is FREE and open to the public.

Again, if you can’t join us for the live segment and show at Club Garibaldi’s, please tune in, per usual, to 91.7 FM (or stream online at WMSE.org) at the 6 o’clock hour.