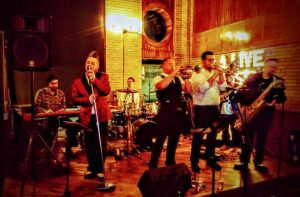 WMSE is excited to be back once again at Club Garibaldi for our monthly Local/Live segments. On Tuesday, November 13, we welcome Stephen Cooper’s Nobody Famous for a live show and interview on-site and over the airwaves that YOU can join!

Stephen Cooper has been a bandleader, sideman, and touring musician for over 25 years. In that time, he has played in 21 states and 7 countries with numerous groups, most namely WiFEE and the HUZz BAND and The Groove Hogs. Deeply rooted in jazz, r&b, and blues, Coop draws in vocal influences such as Amy Winehouse, Otis Redding, Stevie Wonder, and Al Green, while also being a highly accomplished saxophonist and instrumental soloist. Each member of Nobody Famous is a superstar on their own. The band has made a name for themselves in the Fox Cities and won’t be contained any longer!

Soul. Rhythm and Blues. The words conjure romantic images of sweat dripping dancers swaying slowly to infectious Motown grooves, Staxx and Chess chart toppers oozing from the band stand with a harmonic intensity so real it broke your heart. Tender ballads peppered with generous portions of Hammond organ and scorched barn burners precisely punctuated by a ruthless horn section, these were the songs to have you on your feet before the singer even started. The times have changed and music has moved on, but the feeling of all this remains. This is an eight-piece band that promises that feeling will sustain.

Horns. Bass, drums, and keys. Seductive guitar. And at the forefront of all this, Stephen Cooper and his newest group, Nobody Famous, does a bang-up job of combining rockin’ genres to form something that is toe-tapping, to say the least: from R&B, jazz, soul, blues, funk, hip hop, and rock, Cooper has drawn on his accomplishments of the past to bring you something truly special…a living, breathing musical conduit from the past to the present…and we guarantee to bring you that feeling of the heart once again.

As always, WMSE Music Director Erin and co-host Cal will lead the our musical guests through questions in between the live performance with the help of our audience (and audience participation is encouraged!).

YOU can join WMSE and Stephen Cooper’s Nobody Famous at Club Garibaldi as we team up for this live radio show. If you can’t make it, listen live over the airwaves (or in the WMSE archives) at the 6 o’clock hour.

This 21+ event is FREE and open to the public.