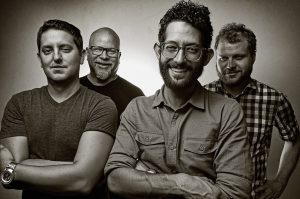 Sleepersound started as a solo project by David D’Antonio (guitars, vocals, synths), and was chosen by him to “invoke the desire to awaken ourselves gradually and ajar from existential slumbers that make us aloof to each other and our world.”

Sleepersound developed from a previous project when David was rooted in St. Louis and Chicago — the latter where David was born and raised, coming to Milwaukee by way of Chicago, then Naples, Italy, and St. Louis. Guitarist Kenny Buesing is from Sheboygan, currently in Riverwest, Milwaukee. Drummer Dan Niedziejko grew up on the south side of Milwaukee and lives just outside it, in Cudahy. Bassist Mike Campise grew up in Chicago and now resides in Milwaukee as well.

In Media Res is a Latin phrase meaning, “In the middle of things.” The sequence of songs – “Give to Time,” “Passengers,” “Gravity Well,” b/w “Terminals,” “Slow Moon,” and “Error Tape” – “all focus on the journey from life into death,” Mike says. “An exploration behind the veil of existence and into the realm of our place in the larger mechanism.” “Convergence, too,” Dan adds. “Things starting while in the middle of other things but coming together to form something new and putting other things to bed.”

In Media Res was made of compositions documented, produced, and performed in drummer Dan Niedziejko’s studio, Indian Not the Arrow. The icy winds from Lake Michigan seem to blow through the six chapters, the songs are augmented by the esoteric talents of producer Kramer at Noise Miami, a true collaborator with such avant-garage bands as Galaxy 500, Low, Bongwater, Daniel Johnston, Ween, and Saeta, among others. You can hear both the original Krautrock but also the basement show-equivalent from the more elegant instrumental math-rock bands inspired by them in the 90s.

Tune into WMSE’s Local/Live on Tuesday, November 20th for new music from Milwaukee’s Sleepersound. WMSE.org to stream live or in the archives or simply tune your radio to 91.7 FM in the Milwaukee area at the 6 o’clock hour.