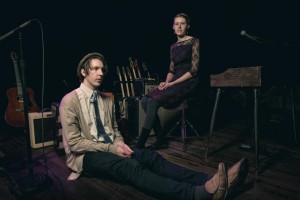 Winter 2008 – A month after turning 17, Donivan Berube, Florida native, disassociates himself from the church of Jehovah’s Witnesses (and therefore his entire family, forever), packs his life into a tiny car, and drives 36 hours north into a Wisconsin blizzard. Things are a little intense.

Spring 2009 – Jacquelyn Beaupre’ meets Donivan at a restaurant and asks him to help her record some songs. Blessed Feathers is thus, “a thing.”

Summer 2010 – They talk their way into shows at small Wisconsin clubs, with bands like Peter Wolf Crier, Youth Lagoon, Phosphorescent, and dozens of others. This is sort of a dream come true.

Fall 2011 – Their collection of bedroom laptop recordings culminates into a limited vinyl release by Listening Party Records, a boutique label from Wisconsin, co-owned by Nick Sanborn of Megafaun, Collections of Colonies of Bees, and Sylvan Esso. They tour the country, and do other things.

Summer 2012 – Blessed Feathers spend two weeks living in a shifty barn in upstate New York to record their first studio session, culminating in the ‘Peaceful Beasts in an Ocean of Weeds’ EP, on which Jacquelyn plays everything, and Donivan plays everything else. While there, they somehow manage to ruin Robert De Niro’s Saturday Morning Breakfast.

Winter 2012 – Donivan proposes to Jacquelyn onstage in front of 600 people at Milwaukee’s Turner Hall Ballroom. People think this is sort of cute. Video of the proposal is uploaded to the internet before they’re even done playing. She says yes.

Spring 2013 – After quitting their jobs and shoving their apartment into a tiny storage unit, Blessed Feathers take off on a four-week US/Canada tour with Mount Moriah and the Cave Singers. They are homeless, and kind of excited.

Summer 2013 – Returning to the Catskills of upstate New York, they record their first studio LP with Producer Kevin McMahon (Real Estate, The Walkmen, Titus Andronicus). Doug Keith, who also plays with Sharon Van Etten, plays guitar on the LP. Aiming to capture the polyrhythmic influences of 1960’s African funk & blues and South American guitar patterns, but with Bruce Springsteen’s ‘Nebraska’ lyrics, they finished in two weeks. After wrapping the album, they left for a six-week National Park tour. They are living out of their tent, and loving it.