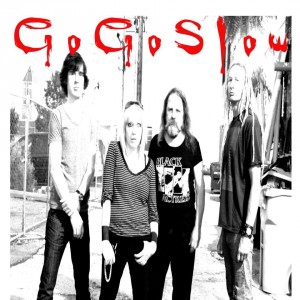 Go Go Slow is a Milwaukee band that isn’t afraid of being labeled. The problem with labeling is that one must follow a certain musical style in order for that label to stick.  What does Go Go Slow think their musical style is like? They would tell you that they play a mix of rock and punk.  It’s heavy, it’s hard driving, but it’s not to be taken too seriously, because serious bands are not really fun to watch.

The band formed in 2011, after a side project found all four current members getting back together to release a long lost album of another band that they were once part of. Since goodbyes are so hard, Dave, Tammy, Dan, and Paul decided to keep working together.

All four member of Go Go Slow (Dave Szlowinski: vocals, Dan Kubinski: guitar, Tammy Raeck: bass, Paul New: drums) have been playing live music for years, but don’t let that fact lead you into thinking that they play rehashed versions of songs from bands that they were once a part of. Comprised of former members of Fu*kFace, Die Kreuzen, Muckrakers, The Crusties, and Boy Dir Car, the music does lean towards something heavy and dynamic. It’s all original music, and it comes from seasoned veterans of the Milwaukee music scene.