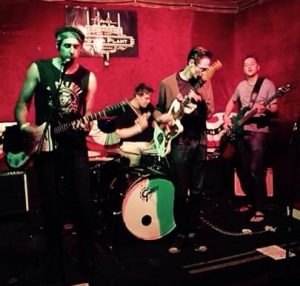 King Eye & the Squirts formed in 2015 after vocalist/guitarist Steve Look and Drummer Jesse Buskov met and shared their affinity for 60’s surf music as co-workers at the late Hotel Foster.

Enlisting the help of guitarist Adam Nelson and John the Savage bassist Paul Fleming, the quartet began gigging as an instrumental surf cover band, but quickly evolved their own vocal-heavy surf/grunge/garage style.

For the past few years, King Eye & the Squirts has continued gigging around Milwaukee and in 2017, is pleased to announce the release of their debut self-produced full-length LP Demonseed. As the album nears its release, the band anticipates a bright future filled with endless Miller High Life and all their favorite hometown haunts.

Tune into WMSE for Local/Live on Tuesday, December 5th to listen to King Eye & the Squirts play songs from Demonseed before its release; WMSE.org to stream live or in the archives, or simply tune your radio to 91.7 FM at the 6 o’clock hour.