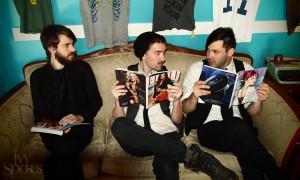 In 2011, Ivy Spokes unveiled their unique style of indie pop-rock – dubbed “bio-digital” – with the release of their debut EP, Chaos to Cosmos. The opening track, “In Dreams,” earned the band a Wisconsin Area Music Award (WAMI) nomination for ‘Song of the Year’.

Since then, the band has toured the Midwest music scene from local radio stations to being featured by TMJ4’s Wisconsin Tonight, The Yellow Phone Music Conference and Summerfest’s Emerging Artists Series. “Part one” of their sophomore release, Upside, will be released February 28th at the Cactus Club in Milwaukee alongside Ikarus Down and I’m Not a Pilot.

Listen to the Ivy Spokes on Local/Live on WMSE this Tuesday, February 25th  — WMSE.org to stream live or in the archives or simply tune your radio to 91.7 on your FM dial at the 6 o’clock hour.