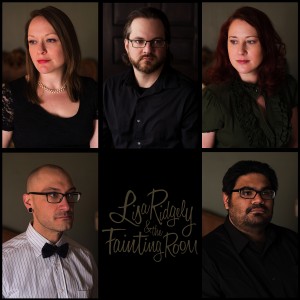 Lisa Ridgely, founder and leader of her Fainting Room crew, started performing as a solo singer-songwriter in 2009, and started her solo career collaborating with local musicians including Sigmund Snopek and Chris DeMay, among others.

Her solo efforts grew into a full band in 2011 (Lisa Ridgely & The Fainting Room); an acoustic singer-songwriter meets Americana twang and harmonies meets screaming rock guitar solos  kind of deal. It’s a potent and dynamic mashup of the genres that influence the band as individuals and as a group.

Tune into WMSE’s Local/Live on Tuesday, June 24th to hear the live versions of those songs at the 6 o’clock hour — WMSE.org or 91.7 on your FM dial.