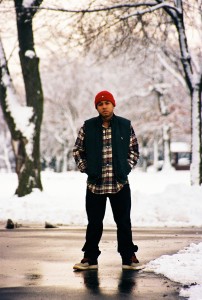 Rapper Demetrius Bennett–aka Yo Dot–is a Milwaukee native who has come to prominence as part of the Umbrella Music group, alongside such local hip-hop mainstays such as Prophetic, Kash and Tay Butler. Growing up on Milwaukee’s Northwest side, Dot used hip-hop music as an outlet to escape the troubles and temptation that plague inner-city neighborhoods still today.

After featuring heavily on the 2010 Mad Bloggers compilation MKE’s Best, Yo Dot released his debut full-length, Red Mist, in 2012, which was named Milwaukee Journal Sentinel’s ‘top hip hop album of the year’ and quickly garnered notice locally and nationally amidst a strong showing for the city’s rap scene that year.

Last June saw the unveiling of his Sherman Park Memoirs mixtape, and then a few weeks ago, Yo Dot re-emerged, dropping his new A Winter’s Ration EP as a bid to break up our collective cabin fever. The mid-January Mad Planet release party with Dana Coppa and Klassik proved to be a successful showcase for some of the city’s best MCs.

Listen to Yo Dot on Local/Live on WMSE this Tuesday, March 11th  — WMSE.org to stream live or in the archives or simply tune your radio to 91.7 on the FM dial at the 6 o’clock hour.