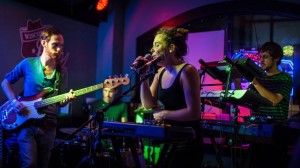 Bright Kind is the answer to the question, “Is there room for one more sonic layer?” In 2012, longtime bandmates Jeanna Salzer, Harrison Dole, and Alex Bunke decided to take their sound in a new direction, forming Bright Kind. Based on their love for thrift-store synthesizers, a good hook, and driving rhythm, they recruited keyboard player Eric Klosterman to round out the new material. In December of 2013, they holed up in Bay View’s Howl Street studio to work on their first full-length album, which is set to be released in mid-2014. Tune into WMSE’s Local/Live at 6pm (broadcasting live from MSOE’s Todd Wehr Auditorium at 1047 N. Broadway for a special segment and show following the hour) — WMSE.org to stream or 91.7 FM on the dial.