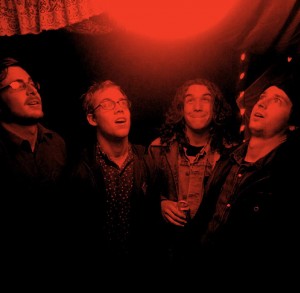 Calliope is a blues-y psych-rock quartet forged between the forces of the sun and the moon in a dingy basement sometime during the year of our lord, 2011. Their organ heavy self-titled debut [2013] showcased their reverberated garage rock vibe and was hailed as “a rollicking collection of retrofitted psychedelic blues songs.” Since then, Calliope has taken their sideshow rock circus to music venues and festivals across Midwest, bringing with it a little madness, more boot-stomping and a lot of fun.

Currently, the band is gearing up for their sophomore release, ORBIS. Recorded in a remote cabin in the northern woods of Wisconsin, ORBIS captures the sonic amalgamation of electric fuzz, droning organs, thundering drums, crushing bass and soulful vocals. The end is a result is 26 minutes of heavy grooves drenched in reverb. The album will be available both digitally and a limited press of opaque red vinyl. The release show is Friday June 6th at Linneman’s Riverwest Inn.