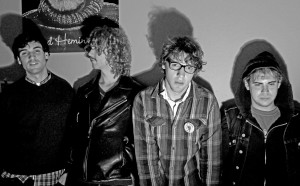 “Rock n’ roll sometimes seems like a lost cause, what with all the freak-folk and electropop clogging up the airwaves. However, once in a blue moon, a band like Midnight Reruns will come along and restore our faith in the cleansing power of guitars, drums, melody, and of course, a good story. Midnight Reruns are Graham Hunt (vocals, guitar), Karl Giehl (guitar, vocals), Brady Murphy (bass, vocals) and Sam Reitman (drums) and damn, do they have a grasp on what music is all about. Formed in 2010, they’ve been playing regularly since and have developed a stage presence that could best be described as “aggressive slack”, not posing, not shoegazing, just throwing it down — a real working-class rock attitude. Equal parts melody and straight-ahead two-guitar attack, Midnight Reruns hit audiences with instantly memorable tunes in a perfect world would be blaring out of car radios, everywhere.

“Their debut LP doesn’t strive to replicate their live show, but neither does it attempt to be a slick studio project. Instead, it captures what is most endearing about Midnight Reruns: their love of harmony, hooks and genuine passion for that thing that is rock music. Songs such as “Going Nowhere”, “Chewing Ice” and “T.V. Z.” will remind you of why you started buying records in the first place — that indefinable sense of excitement of wanting to turn the stereo up as far as it’ll go and sing along. As well, there are moody, contemplative tunes like “Grand Slam” and “Signals From the Blue” that stick in your head in the manner of classic ballads from down the ages. Midnight Reruns are one of those bands that make discerning listeners rejoice in the pure joy of rock n’ roll. Do yourself  a favor and be one of those listeners.” – Keith Brammer of Die Kreuzen