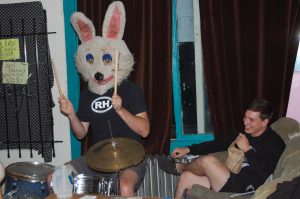 WMSE’s Local/Live once again returns to Club Garibaldi’s for another awesome season of monthly Local/Live segments!

On Tuesday, November 7th, we welcome the one, the only, Wisconsin legend…the Rhythm Chicken!

The Rhythm Chicken is a non-musical enigma wrapped in uncooked bacon. He’s played in the woman’s bathroom at the Cactus Club and to a crowd of 40,000 at Miller Park. He’s played at the finish line of a marathon in Las Vegas and on a pontoon boat in the River Elbe in downtown Dresden during the fireworks finale of Stadtfest. He’s played at sausage shops and fish boils. He’s played in Poland, German, Kansas, California, and Cudahy.

He has played to a crowd of zero in the woods, and he’s had Deathcab for Cutie open up for him. All this might lead you to believe he’s notable on some level, but he’s not. He’s just a chicken who lives above a soup shop.

You can join WMSE and the Rhythm Chicken at his newest show locale at Club Garibaldi’s as we team up for this live radio show. If you can’t make it, listen live over the airwaves (or in the WMSE archives).

As always, WMSE Music Director Erin Wolf and co-host Cal Roach will lead the Rhythm Chicken through questions in between the live performance with the help of our audience (audience participation is encouraged!).

This is a 21+ event which is FREE and open to the public.

Again, if you can’t join us for the live segment and show at Club Garibaldi’s, please tune in, per usual, to 91.7 FM (or stream online at WMSE.org) at the 6 o’clock hour.